The royals in any part of the world used to have very exquisite life styles. It used to be grand and exotic. Especially in India which was used to be called the golden sparrow has always seen this grandeur and funtabulous life styles of royals. Thanjavur has been on the radar of wander lusts as it is the place which has been governed by many different reigns in its history and everyone has influenced its art and culture in very different ways and have left their memorabilia for future generations. Thanjavur royal palace is one of them. 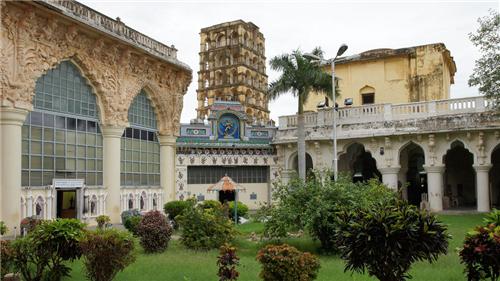 Thanjavur royal palace is one of the most visited places in Thanjavur and has always attracted tourists. The palace is situated on the east main street, in the Vijaynagara Fort complex and can be reached easily by local transport. If you turn the pages of history you would find that this palace was partly built by Nayaks in 16th century and was completed by Marathas in 17th century. So there is influence of both the reigns in the building.

The entry in the royal palace is through a grand quadrangular courtyard which had two gigantic gated on north and east sides.

There is a vimana like building on the southern side of the palace. It is tall and grand and high about 190 feet.  It is an eight storey structure and was used watch tower of palace to keep a check on security of royals.

There are two darbar halls one of which is Hall of Nayaks and the other one which belongs to Marathas. 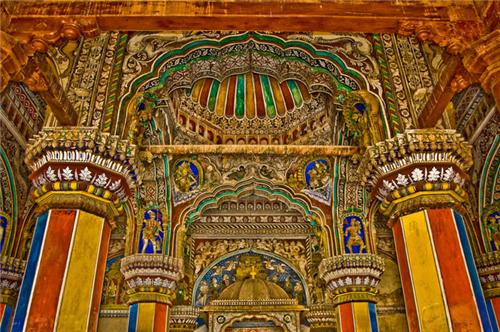 There is another tower named Madamaligai. It comes up from the palace roof beyond the watch tower. It is six storeys. This palace was built to enable the Nayak ruler worship Sri Ranganatha of Srirangam every afternoon. Natural calamities have destroyed a part of this tower which is now repaired by authorities and is now preserved and taken care of very well.


Sarafoji Saraswathi Mahal Library is very prominent place in the palace as it has magnanimous collection of about 30,433 sanskrit manuscripts which are etched on the palm leaves and 6,426 printed volumes, besides a large number of journals. The library got its present shape and stature because of Nayaks and Marathas love for literature and culture their efforts for the collection of rare manuscripts has resulted over 300 years into what we today see as the grand library. In this library there is date with history.

Nayak Hall was given its name because it was built by Nayak Kings. It is the place where Thanjavur Art Gallery is present and it showcases the historic art paintings of Nayaks and Cholas.

Durbar Hall was constructed by the Maratha rulers and has everything decorated in Thajavur typical fashion.

The palace offers a beautiful view of the Vijaynagara Fort complex.

Timings for visiting the Palace: