India is very blessed by nature there are scenic beauty and amazing geographical locations in every corner of the country. Thanjavur is a very famous city located in Tamil Nadu. It is surrounded by delta of rivers that give city its unique feature and name as rice bowl of Tamil Nadu. The Cauvery river tributaries namely, the Vadavaaru, Grand Anaicut canal, and Vennaaru rivers flow through the city. Rivers and ocean give the city a very beautiful weather throughout the year and mild breeze flowing through the city can elevate your mood at any time of the day. The city is always flooded with tourists at any time of the year but there is a prime season in which the essence of the city can be enjoyed to the fullest.

The location of Thanjavur on an atlas is 10.8°N 79.15°E. The city has an elevation of 57 m (187 ft) above mean sea level. The total area of the city is 36.33 km2 (14.03 sq mi). Thanjavur is situated in the Cauvery delta. The city is at a distance of 314 km (195 mi) south-west of Chennai and 56 km (35 mi) east of Tiruchirappalli. The river makes its surrounding land very fertile to crops and that land is being used for cultivation from very early in its history of human civilization. Most of the Thanjavur city lies in the New Delta. It was a barren land that was bought under cultivation by the 19th century. It is the place where now the city resides.

Vallam tableland which is to the south of Thanjavur is a small plateau interspersed at regular intervals by sandstone. Nagapattinam which is 84 km (52 mi) east of Thanjavur is the nearest seaport while  Tiruchirapalli International Airport is located at a distance of 56 km (35 mi) from the city.

The city is bounded on the northeast by Nagapattinam District, Tiruvarur District on the east, on the Palk Strait to the south, of Bay of Bengal on the west and on the north by the river Kollidam. 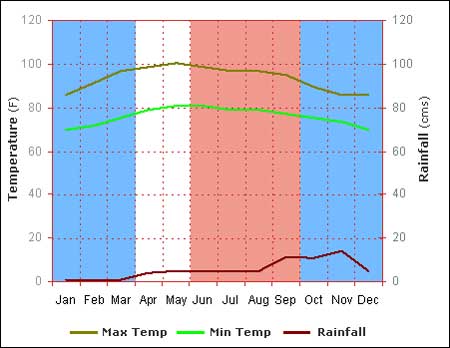 The city is surrounded by curvy delta of Cauvery, Bay of Bengal and many more. Its presence with river and sea give atmosphere a little humid texture. Smooth breeze flows through the city most of the time. Here you can enjoy all the seasons of year. Different timings of your visit to city in different season would give a little varied taste of city every time.

Staring from the calendar month of November to February when whole of the north India is in the arms of heavy winters weather in Thanjavur is pleasant. The climate is warm during the days and cool during the nights. With a little spring summers come early in the city with March. Mercury keep rising and rising till May and June. Summers are deficient of rains but the first monsoon comes up in June and stays till September (South West monsoon). Next monsoon comes up in October and stays till January (North West monsoon). The amount of rain fall in first monsoon is much lower than the second monsoon. The second monsoon is infact beneficial to the city as heavy rainfall and Western Ghat feeding the river Cauvery. The average rainfall amounts to 37 inches (940 mm) a large part of which is contributed by second monsoon.

Keeping the view of weather conditions the best time to visit the city is from October to February. It is the best time to enjoy the flavor of the city as some of the most celebrated festivals lie in this duration of October to March. Experiencing of the vibrations of festivities surely makes the overall experience of the city more magnificent, lovable and memorable.