Thanjavur is the city of culture and music. This is a city that has mythological significance and was ruled by many powerful kings belonging to different dynasties. Most people come to Thanjavur to visit the temples which are popular all over the south India. Apart from the most visited temples in the town, Sri Garbarakshambigai Amman temple is the one that has special importance. 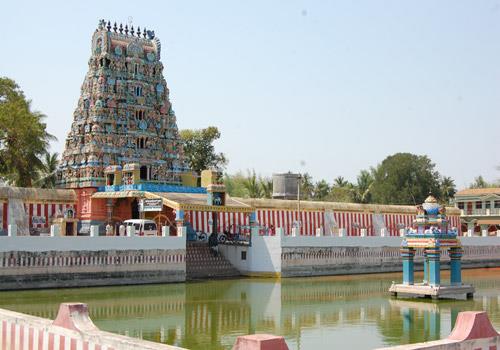 Vedhikai a devotee of Sri Garbarakshambigai Amman was blessed by the goddess to conceive. But when Vedhikai was about to lose her pregnancy, Goddess Sri Garbarakshambigai Amman came down to protect the fetus of Vedhikai and helped her to safe delivery. Many people who are having trouble to conceive visit this temple from faraway places and different countries to seek the blessings of Goddess. All the devotees who seek her blessings are blessed with children and the women who seek her blessings have a healthy pregnancy and safe delivery.

Sri Mullaivananathar Swamy is also known to grant better health. The deity of this temple is self manifested. As he is a swayambhu, one can see the impression of mullai creeper all over him. The idol is made of hardened mud and no Abhishegam is offered to the deity in this temple. Punugu sattam is offered to the swamy on the Valarpirai Pradosham day which falls on the 13th day of Sukla patcham Pradosham (13th day after the new moon day). Devotees believe that this punugu has power to heal all kinds of health problems like heart problems, skin problems and other incurable diseases.

To conceive, the childless couple offer Ghee prasadam pooja. For a safe delivery of the child people perform Castor oil prasadam pooja. To get relief from different health problems, people perform Punugu sattam pooja. Other poojas include, Abishegam, Annadhanam, Kattalai Archanai, Nava kodi nei theepam which is lighting nine crore ghee lamps, Sandana kappu which means offering sandle paste to the deity, Thanga thottil and Thulaa-bharam. Ear boring and Head tonsure are also performed in this temple. The temple is open from 5:30 AM until 12:30 PM and from 4 PM to 8 PM.

There are around 31 inscriptions on the walls, sanctum and inside the hall of the temple. These inscriptions are believed to be dated back to the period of Cholas dynasty. The inscriptions state the grants that were received by the Kings to build the temple.