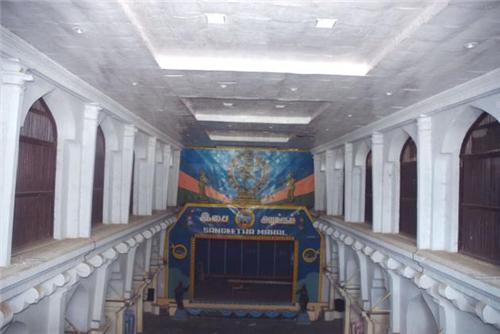 Sangeetha Mahal, situated within the Thanjavur Palace. Sevappa Nayak, the Nayak King is credited to built the Mahal in the 1600s. Initially, Sangeetha Mahal was known as 'Navaratnamanamaina Nataka Sala' (the Theatre adorned with gems) because it was decorated with very precious gems. This theatre was later renamed as 'Sangeetha Mahal’ by Marathas when they started to rule the city.

Sangeetha Mahal is sheer brilliant example of royal architecture and marvelous acoustic properties. It is a rectangular shaped hall with exotic chandeliers decorating the roofs. The hall is sheer architectural brilliance because it is built in such a way that there is a balanced absorption and deflection of sound waves and the sound reaches clearly to even the last row of the hall. The hall is also devoid of excess amplification.  The magic of properly deflected sound waves comes from the water-pool in front of the stage as well as the decorations and perforations that are present in the walls and roofs of the hall.

Sangeetha Mahal can accommodate 1000 audience. The performance site and the audience site are well below the ground level.

The mahal has been constructed in such a way that all have a clear view of the festivities goiung in the mahal, no matter wherever they are seated. The ordinary people view the festivities from the ground floor and the royal people view through the huge window openings. It might sound simple but the real effect of such construction was that the royal entourage could not be seen by audience and the performers whereas the reversal could occur. This was also done to ensure the security of royal families on public gatherings.

In modern times when the hall is used to conduct modern concerts and programmes a lot of modern electronic instruments like mike, radios, recorders. amplifiers etc., are used but acoustic brilliance of the hall still make the arrangement doubly wonderful because it was accordingly designed. There is a very huge stage where music concerts, Dance, and other performances can be conducted with the due permission from the district administration and concerned authorities.