There is much of the fascination about the historical things. It makes you wonder whenever you see any old and great thing that how such a wonderful thing survived such magnanimous time leaps and are still stood by heavily and holding roots in the ground without deterioration. One such example of Tamilian excellence and brilliance is the Grand Anicut. 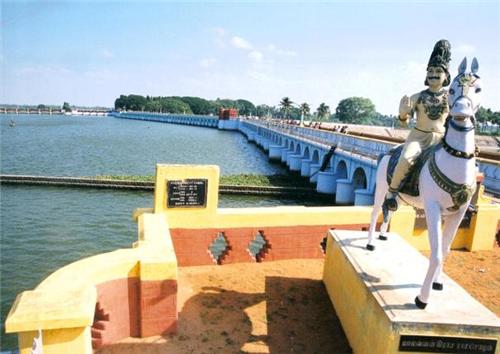 It is true to its name in grandeur. The grand Anicut is one of the oldest dams built by the Cholas and still used for irrigation purposes.The dam which has been constructed on the Kaveri river is among the world’s oldest dams which makes visit to this historic place an event in itself. This marvel was built in the reign of King Karikalan, a Chola ruler around the 1st century. The humble reason for constructing this was to divert the river water  to the delta districts so that it can reach far off places and can boost up irrigation. Several calamities have washed Tanjore but this dam has stood by all that times and even today it glorifies the city in most amazing ways. From this dam you can have a great natural view of the sparkling flowing Cauvery water. The dam splits the river Kaveri into 4 streams known as Kollidam Aru, Kaviri, Vennaru and Puthu Aru

This dam is 329 m long and 20 m wide. It is one of the most loved natural locations in Thanjavur city. It is actually not present in the main Thanjavur city but at a distance of 15 kms from the city. But it can be reached easily with local transport and private vehicles. The best thing about visiting this place is that there is no entry fee for enjoying this natural location.


Explore more about Tourism in Thanjavur