Thanjavur, the beautiful city in the state of Tamil nadu is an important place for art, culture and architecture. The city was the capital city during the 250 years rule of Chola dynasty. There is so much to see and explore in this city that you will learn something new in every corner of the city. Gangaikonda Cholapuram Temple in Tanjavur is a place where you can see the beauty and skills of Cholas’ architecture. 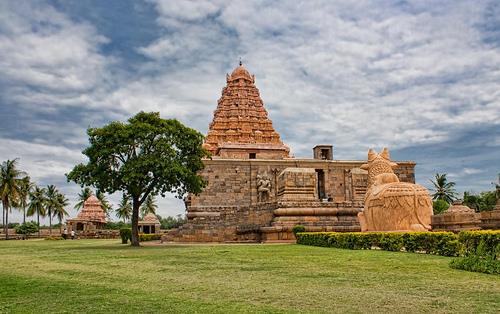 The Gangaikonda Cholapuram Temple was built by the Chola king Rajendra Chola in the 11th century. Rajendra Chola was the son of Rajaraja Chola. He took over the crown of the Empire as the successor of Rajaraja Chola. This huge and grand temple stands next to another important temple of Thanjavur, Brihadisvara temple.
When the Cholas dynasty was conquering the major part of North India as part of their expanding territory, King Rajendra Chola brought water from River Ganges in a golden pot and consecrated the Cholaganga reservoir. After King Rajendra Chola brought the Ganga water, he was titled as 'Gangaikondan' which means, the one who brought the water from Ganges. That was when the King though of building a temple that was grander than the Brihadeeswara Temple. So, he planned and built Gangaikonda Cholapuram Temple to make it look more beautiful and grand than the temple built by his father. The construction of the temple took place during the 1020 - 29 AD. . It took 9 years for the architects and artisans to build this splendid piece of beauty.

Gangaikonda Cholapuram Temple has the largest Shivlingam, phallic form of Lord Shiva in the entire south India. The sanctum sanctorum of the temple touches the four meter high lingam. The sanctum of the temple is encircled with two walls to give privacy for the Royal family while offering prayers. The mainly entrance of the temple is decorated with the beautiful images of Goddess Saraswati. One can see the influence of Chalukyas in the architecute of the temple. The icons of 'Suryapita' (Sun worship) and 'Navagrahs' or 9 planets show the influence of Chalukya. The history of all the Chola Kings are inscribed on the copper plates and the walls of the temple.

The beauty of the temple speaks for itself. The temple has 9 storey vimanam that rises to a height of 185 feet. On the east side of the temple one can see the beautiful carvings and incredible structures. The structure of the temple is similar to that of the Brihadeeswara Temple. The temple structure is built at a height of 54.86m. One can see the rich carvings all over the temple that are unique to the Cholas style of artistry. One can also see intricate carvings on the vimanams of the temple that is believed to be taken from the North Indian temples.  All the carvings are made on granite stones. The walls and ceilings of the temple are adorned with sculptures that are outstanding. Like any other temples built by the Cholas, the sculptors are creative and show the artistic taste of the Cholas. The most beautiful sculptures in the temple are that of Ganesha, dancing nataraj, Goddess Saraswati, Shiv-parvathi and  Ardhanareshwar.

The mind blowing beauty of this temple will take you back in time and lets you enjoy what people during the Chola’s rule enjoyed.