There are various wonders in this world that can leave you awestruck by their magnificence. India is a land where wonder and marvel takes you to another new level of amazement. Every nook and corner of this God’s amazing country speaks something special about the place and has got certain amount of hidden magic in it. This is the magic of sheer wonderfulness and glory which is embedded in the historic brilliance of country. 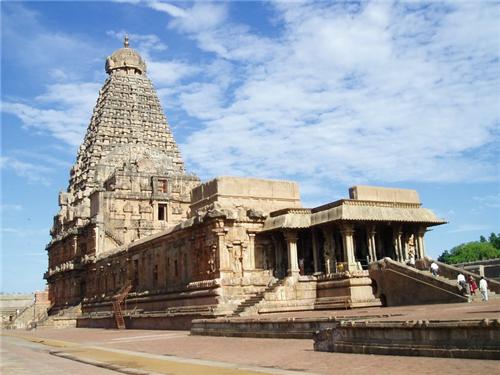 Within India itself the cultural richness is so vast that the spoken language changes after every 200 kms. It had been influenced by most influential dynasties in the world and they all have left certain trademarks of their reign for us to cherish. Thanjavur in South India is a cultural center. Its music, dances, festivals and everything has got a special taste about it. On of the most visited places in Thanjavur by tourists from all over the world is Brihadeeswara Temple.

Brihadeeswara Temple in Tamil Nadu is an example of fantastic architecture and workmanship. It was built by Chola king Rajaraja I in Initial decades of 11th century. It was meant to symbolize the power of the king and was built to celebrate a military victory. The temple is dedicated to Lord Shiva. The shivlinga that is enshrined in the temple is 12 feet of height and the Nandi that faces the Shiva Linga also is 12 feet high. The temple is  constructed in a Dravadian style and on the rules of symmetrical geometry. The brilliance of temple is architecture and its cultural and social connection made its way to the list of world heritage places list of UNESCO.

There are certain very fantastic facts about the temple:


Such brilliant is the presence of temple in the city that it has become the talking phrase about the city. It is the face of all tourist campaigns and attracts the most tourist across the world. The temple is well taken care by government and authorities which are adding to the life and beauty of this wonderful site.